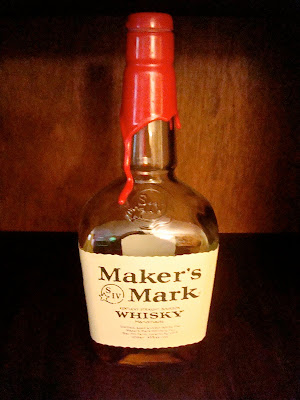 If you read last week's post, then you already know the ingredients for this month's Thirsty Thursdays Challenge ... Bourbon and Cucumbers. The good news is that I'm not requiring you to pair them together!
Since we have two ingredients, you are free to choose either bourbon or cucumbers. If you're really daring and want to take a risk - go ahead and pair them. Who knows, maybe you'll create a new mixological sensation and become wildly famous. Maybe bourbon and cukes are a match made in heaven ... only time will tell.
So, a brief little primer on bourbon before we get to the rules.
Bourbon is an American whiskey distilled from fermented mash that's primarily (51% or higher) made of corn. Like most whiskeys, its aged in charred barrels to achieve its distinct brown color and to add to its flavor. In fact, in order to be classified as bourbon, the distilled spirit must be aged for a minimum of two years in new oak barrels that have been charred specifically for aging. Bourbon cannot be aged in used barrels; however, once the barrel has been used, it may be re-used to age scotch and or other spirits.
While bourbon can be made anywhere, the majority of American bourbon is made in the state of Kentucky. Popular brands include: Wild Turkey, Maker's Mark, Four Roses and Jim Beam, to name but a few.
Flavor descriptives often associated with bourbon are: sweet, smokey, vanilla, caramel, toffee, leather, molasses, maple, oak, brown sugar, apricot and almond. That list can go on and on, depending on the sensitivity of one's palate and the particular brand, of course.
Bourbon pairs well with: orange, lemon, vermouth, bitters, mint, peaches, butterscotch, grapefruit, ginger, grenadine, apricot, cherries, rosemary, honey, bacon, pineapple and maple.
And, so as not to leave our friend the cucumber out, let's take a moment to talk about pairing him up as well. In terms of spirits, I'd mix cucumber with almost anything clear ... vodka, gin, sake or shocou, etc., though you're by no means limited to that short list. Use your imagination!
Cucumber pairs well with: mint, cilantro, citrus, tomatoes, dill, parsley, chile peppers, pineapple, yogurt, lemons, limes and thyme, to name but a few.
So what are you waiting for ... get out your shakers and get mixing. The rules of the May Challenge are as follows:
1. Create a cocktail using either bourbon as the base or cucumber as an ingredient and write a blog entry about it. Post your entry sometime before midnight on Monday, May 31st. Previous blog posts in which you've used either bourbon or cucumbers in a cocktail recipe will be accepted.
2. Blog about your Thirsty Thursday Challenge Cocktail, including photos, and include a link back to Beach Eats: http://beacheats.blogspot.com
3. Send an email entitled "Thirsty Thursdays May Challenge" to: ttchallenge[at]gmail[dot]com
The email must include the following information:
You can still participate even if you don't have a blog. Simply send an email with the above information, minus the blog stuff, and I'll include you in the round-up
The round-up will be posted on Thursday, June 3rd and a winner will be declared at that time. Said winner will have the privilege of choosing next month's spirit or ingredient. Good luck!
Special thanks to Tangled Noodle for choosing the cucumbers and to Suzy for choosing the bourbon. I can't wait to get mixing ... look for a new cocktail recipe next week!
Cheers!
Posted by The Diva on a Diet at 11:00 AM

Diva, i was waiting for you to pour me a Maker's on the Rocks!

Now bourbon I know about... I had the most amazing 15 year old bourbon at my uncles house and sat there with the old men having our bourbon (they smoked cigars while i sipped) and it was delicious! I could taste the sweet caramelly notes and regretted not having a second glass.

I cant wait to see the results!

Looking forward to it!

Mo - aw, what a cool story. I love it! And, hey, maybe you should have had a cigar along with that 2nd glass?! LOL

Sure you don't want to mix up a bourbon drinkie on your own and join us??? :)

Lynnylu - I hope you'll join us this month too. Looking forward to your creation!

I enjoy reading your blog. I thought I'd mention that when I was in Kentucky, I was told that only whiskey made in Bourbon County, Kentucky, can legitimately be called 'bourbon' - all others have to be called 'whiskey'.

Just a little trivia as an FYI.

Re Maker's Mark - I always drink it straight with a twist of lime - as I do with Jack Daniels....sour mash whiskey - my favorite.

Picked up a bottle of bourbon just today! Team Noodle decided that since we picked cukes, we'll take Suzy up on her challenge. Can't wait to see what everyone concocts!

Happy in Nevada - hello and welcome! You're right, i should specify that while technically, the liquid can be made anywhere, if its not made in Kentucky, it will be called "bourbon whiskey". Good point!

I admit I've been a bit tentative with bourbon since an experience back in college. We all had those, right? I do make a mean bourbon pot roast. Gosh, you know how I can't resist a challenge. Hmmmmm ...

Cucumbers I've used in smoothies, but never a mixed drink. Another hmmmmm ...

I love these thirsty Thursdays. I just had a coconut milk hot cocoa. Now I'm wishing I'd added a bit of spirits to it--more than my homemade vanilla anyway. ;-)

The Diva on a Diet
Must I really describe myself here? You know me, you love me, you can't live without me. I'm just your typical every day Diva with a tiara in one hand and a bag of Doritos in the other. Sure I need to lose some weight, but what else is new? Pay strict attention cuz there will be a quiz. Warning, there's going to be a lot of chicken recipes posted here ... and no small amount of cursing.

Bookmark this on Delicious

The Diva's Favorites: Blog-roll and other sites I visit

Thou Shalt Not Steal ...

Beach Eats - A Dangerous Combination of Dieting and Mascara by The Diva on a Diet is licensed under a Creative Commons Attribution-Noncommercial-No Derivative Works 3.0 United States License.
Based on a work at beacheats.blogspot.com.